Dolo 650 Mg Tablet is formulated in the category of Pain Reliever. It is predominantly used as to treat different kind of pains and fever. Dolo 650Mg is very commonly used in India for the pain treatment. The pain & fever relieving effect of Dolo 650 Tablet can be observed within an hour after taking the medicine. 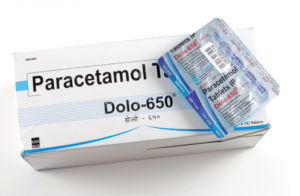 An adult can take Dolo 650 MG Tablet alone or in combination with another medicine if prescribed by physician. In high fever a person should take it regularly with a time interval of at least 5 hours or as advised by the doctor. It is advisable usually to take DOLO 650 with food otherwise it may upset your stomach. It is strictly advisable not to take more dose or use it for longer than the recommended dose by Doctor.

Below is the composition of Dolo 650 Mg Tablet.

As a medicine Dolo 650 Tablet is used to cure following conditions:

Dolo 650 Mg Tablet is used to treat pain in body. The effectiveness of medicine is strictly depends on the severity and condition of patient. It works in different ways as per patient’s age group, gender and the medical history. Dosage of medicine should be followed strictly as prescribed by Doctor.

Side effects of DOLO 650 MG are seen rare if this medicine is used as per the prescription. But in usual cases Dolo 650 may cause someone nausea, stomach pain and vomiting. We advise you to consult your doctor if any of these side effects bother you after taken Dolo 650 MG.

If a medicine is used to cure some kind of health problems, along with the intended benefits there are chances of getting a few unwanted side effects too. Side Effects may vary from person to person so doctor should be consulted for medication, and dosage.

However DOLO 650 is widely prescribed in fever & pain and considered safe but is not suitable for everyone. Please tell your doctor about all the other medicines which you are taking regularly because they may affect, or be affected by, this medicine. Before taking Dolo 650 tablet, let your doctor know if you have any disease or problem relatedto liver, kidney and heart. It may affect the dose or suitability of this medicine.

The most common side effects of the Dolo 650 Mg Tablet are the following:

Dolo 650 MG tablet is really a very effective medicine in Fever & body pain. And it is used worldwide with no restrictions. So overall DOLO 650 is a good medicine. If you have some other studies related to side effects, uses, doses then please let us know in comment box so we can share your study with our audience and update this article too.